Earthscape, the native iPhone application is developed by a Boulder-Colorado which seems like the iPhone version of Google Earth. However, this is not a rip-off of Google Earth but is the mobile version of their own virtual earth program which is described as a social geobrowser. To turn Earthscape mobile into a killer iPhone application, iPhone’s accelerometer and touchscreen capabilities were used.

Some views on the geobrowser: Earthscape’s geobrowser permits you to mark choice spots with stories, photos, travel tips, restaurant reviews, Wikipedia articles and other dynamic content. Different image overlays of the same spot can be seen during different seasons and different times in history such as toggling between summer and winter images of snow-capped mountains.
With iPhone version iPhone’s accelerometer is used so that the view of the 3D earth can be tilted and rotated while the touch screen is moved around and also zoomed into the geographic imagery.
The credit for discovering this iPhone application goes to Frank Taylor from Google Earth Blog who came across upon this app while attending “2008 Where 2.0” as there appears no information available yet about the native iPhone application on Earthscape’s website (I guess that would be because it still a demo version). 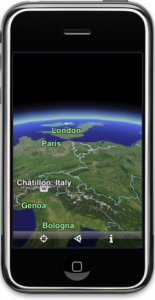 Frank noted that the demo version of the iPhone app was running locally and probably that was the reason why the image refresh were so impressive. Real geo-spatial information downloaded over Wi-Fi or 3G will be needed for the final version of the application which could ultimately affect performance. As the application would take a ton of bandwidth using the application over Edge would be out of the question.

Now you can access all you Gmail contacts and mails on you PC. Whatâ€™s new? In cases where you need to retain contacts information across different applications and programs like email, Skype, Gtalk and any other similar applications with availability on more than one computers then its going to be difficult or may not feasible…

QuickGold is a Free iPhone or iPod touch application. It intends to replace the “Quicksilver for the iPhone”, therefore the name is QuickGold. It is a keyboard-based app launcher which can be called on by pressing the home button when you are at the homescreen. Once activated you can then start typing and view its…

The Treo Pro smartphone by Palm is perfectly balanced, with email, Wi-Fi, and GPS and large color touchscreen.

In case you are interested in cooking and would like to try new recipes then you should visit FoodTube which has got everything that will be required by you. Ingredients or type of cuisine can be searched for at FoodTube very easily. Newly added videos can be browsed. Videos are uploaded from YouTube and personal…