The browser which is basically adopted technology from Firefox 3.0 was in news to be out soon. Now that it has been release all the excitement behind it has now come to an end. One thing is assured you will get all the performance, features that of Firefox 3.0 ,even similar appearance in few aspects like the address bar and others. It was found that the makers of Flock succeeded well in the integration of the Firefox capabilities. One of such things is visibly clear about the bookmarking feature which is of its kind introduced by Firefox 3.0. You are even provided with online bookmarkers like Ma.gnolia and Del.icio.us web sites. 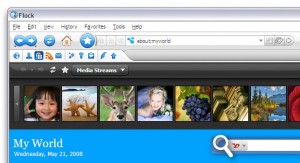 The significant refinement is the performance and it is as a result of efficient management of the memory resources that even made by Firefox. When a about dozen tabs were opened then Flock 2.0 used less than 100 MB on Windows OS. If you are user highly used to Media content then this is a right option.

It had many other powerful capabilities that are of course built on the roots of Firefox approach. One such difference is Firefox might need few extensions to get few additional features but for Flock they are right built it. With a little bit of compromise in memory usage it could be better than Firefox. You can observe that it is much more improved better one than its predecessors that are used to. Manual refresh of feeds can be done and Antivirus can be integrated.

Flock 2 Beta(two) is now accepting Test Pilots to test their new version of Flock. So if you are interested you can download their latest version to give a feedback to them.

Many people Optimize their landing pages so that they will have a better Search Engine rankings. Now with the help of Google Webmasters you can also optimize your 404 pages. To optimize Googleâ€™s 404 Pages and help visitors to get a better experience by browsing around the site rather than leaving it, Google wanted to…

I installed Google Chrome on the very first day when it was released. Though I was not using much I feel it is a good secondary option. Yesterday I was using it quite for a longer time and then thought of searching for some Google Chrome Tips. Here are some of them to share with…

If you are a Blogger or Webmaster and are looking to embed a Google map to your Website or Blog I suggest you to try MapMyPage. MapMyPage offers a simple free script to add Google Maps to your website. All you have to do is just copy the one line of JavaScript into a webpage/blog…

Taking backup of the data is really very important either it be on your PC or your mobile. After the advent of the Smartphones people are carrying a lot of valuable data in their mobiles. So it is very much necessary to keep the data present in you mobile at a safe location. If you…

Yesterday Google announced it’s support for OpenID 2.0 protocol. So now with your existing Google account you can login and use other sites. I think this move was made after Microsoft announcing that they will give an OpenID for all its Windows Live users. This new log-in offering is not available to all site owners….