Hewlett-Packard (HP) is known for coming out with devices that boast of excellent craftsmanship. HP Slate 500 Tablet PC is one 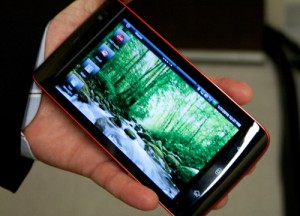 such example. HP Tablet 500 PC is targeted towards business users and seeks to give a tough competition to Apple’s iPad. The tablet PC has several applications which are suitable for office use and is equipped with several software intended for apps in the field of retail, hospitality, medicine etc. Read on the HP Slate 500 Review to know more about this tablet PC.

When Apple launched its iPad device, it sold like hot cakes. So it became imperative for other IT giants to come up with products that could match the might of the iPad. HP which has always come up with products which enriches users experience to browse internet, listen to music and watch videos.

The metal edges and the rubberized texture give HP Slate 500 Tablet PC a classic finish. The above features give the tablet PC a durable feel and its 1.5 pound weight makes it quite portable. You will find the several buttons around the metal edges and the device also integrates Wacom stylus which is fun to use when you are using Paint or Wordpad.

The screen of the PC is capable of displaying pictures of resolution measuring 1024×600 pixels and uses Broadcom Crystal HD accelerator for video playbacks. The screen of HP Slate 500 PC is smooth and silky with fair amount of backlight bleed around the screen.

HP Slate 500 is powered by 1.86 GHz IntelÂ® Atomâ„¢ Processor Z540 with 2GB DDR2 SD RAM. It supports 1080p playback which is powered by Intel GMA 500 graphics chipset and has support for stylus pen/digitizer for freehand writing and drawing on screen. The device has a single USB port, a full SD slot and a combination of headphone/microphone jack. HP Slate 500 PC is powered by a 2 cell (30 WHr) polymer battery which offers a runtime of around 5 hours. Connectivity in the tablet is enhanced by the presence of Wi-Fi and Blue Tooth. 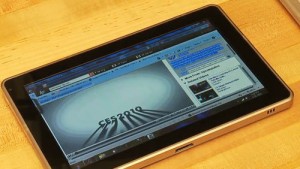 interface. The PC is equipped with the following software

Some of the other technical specifications of the product are

The tablet is equipped with dual webcams. There is a 3 MP outward facing camera is along with an inward facing VGA webcam. The webcams are fine for videoconferencing and calls.

The tablet PC comes with standard accessories such as docking and port replicators, battery charger and power adapters.

The slate PC was released on October 2010.

HP Slate 500 PC is one of the most powerful tablets available in the market which satisfies most of your business requirements. However, the absence of specialized touch interface is one of the major drawbacks of the tablet PC. Web browsing experience in most of the cases is smooth but in some cases it is a bit sluggish. But the tablet is a well made product made by HP and is helpful in smooth transition of business works.

Realizing the potential of the tablet market several Indian mobile firms are preparing to come up with tablets within Rs 10,000 and Rs 20,000. Firms such as Spice, Karbonn and Lava Mobiles are all prepared to foray in the tablet market. The decision of Indian firms to venture into the tablet market is sure to…

LG Mobiles, which has recently come up with a couple of smarphones namely LG Optimus 2X and Optimus Black in the Indian market has announced that its its yet to be launched LG Optimus Pad Tablet PC will be launched in India by June. LG however, has not yet revealed the pricing of the tablet…

iPad 2 Preview Amidst high anticipations, Apple has finally unveiled its iPad 2 tablet PC on March 2, 2011. For gadget aficionados and Apple fans, the iPad 2 unveiling event was truly an affair to remember. Check out our iPad 2 Preview to know what you can expect from this sleek, slim device. iPad 2…