Television has evolved a big way off late and gone are the days when television was viewed just as an entertainment device. Samsung 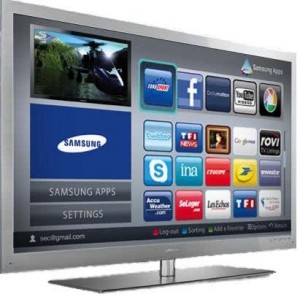 has come up with Smart TV which gives users a whole new experience of television viewing. Smart Tv from Samsung allows you to find television shows, chat with friends, search movies and even browse the internet. Sounds really cool, isn’t it? Check out our Samsung Smart Tv review to know what the product holds for you.

Samsung has packed its Smart Tv with a host of features. One of the most impressive features of the television is the presence of new technology which allows users to surf the internet using a web browser. The thin looks of the television further enhances the looks the television and the colors are very bright and vibrant. Users can watch high definition videos at 1080p and users can also read news on the television. With Search All function users can find out shows and view live television. With video recommendation engine users are suggested about the latest videos based upon their individual choices.

Some of the Samsung SmartTv models come with in-built Wi-Fi and for some of them you need to get a wireless adapter known as link stick. With one push button you can share of the content from 2D to 3D which further enhances your viewing experience. Picture quality of SmartTv is enhanced with Samsung’s Wide Color Enhancer Plus and thanks to the Ultra Clear Panel technology incorporated into Samsung LED Tv, the picture quality improves further as it gets rids of the glare and reflection.

The television has nearly 500 applications and the number of applications will continue to grow in coming days. One can also download several applications from Samsung apps to watch movies, sports, music videos and much more.

For most of the activities on Samsung SmartTv requires users to enter texts and post updates. Samsung offers a mobile phone like keypad and then there is a remote control with QWERTY keyboard. We also felt that Samsung should provide support for Bluetooth keyboard and mouse which will further increase the utility of the television.

Samsung SmartTv’s web browser does a pretty good job and the support of Adobe Flash with the browser further enhances its performance. Most of the web pages displayed are very vibrant and scrolling is also pretty good.

Price of Samsung Smart Tv varies from model to model. Samsung Smart Tv is a great combo of feature and style. It is one of the cool gadgets which you will find in the market and if you are looking forward to enjoy high-end television experience, then you can surly bet for Samsung Smart Tv.