Asus Eee PC 2G Surf is a cool looking portable netbook computer which got its birth way back in 2007. It has to be said that Surf went into the houses of many than its predecessor Asus Eee PC 2G which was one of the remarkable achievements of Asus Eee PC 2G Surf. This 0.92kg notebook computer has an interesting feature which you will not find in any other netbook computers, sounds interesting? If you take a deep look at the screen of this notebook you will notice the presence of two speakers present at the both the sides. You will not witness this when you see it for the first time with a casual eye, just take a deep look and you will be amazed to see that the image or the window running is not present fully in the screen. 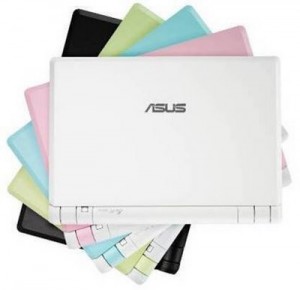 Asus Eee PC 2G Surf has a small 7-inch TFT screen which is really not enough to see the whole webpage but still the resolution is better than all other netbook computers. So I never mind scrolling it, how about you? The keyboard present is actually small when compared with other notebooks present in the market but I would say that the keys are soft. Do not worry when you type a document as you can get full screen and a good typing speed because of the soft keys. I feel hard when I hit enter hard but what to do I need to do it quite often.

The main thing which is annoying me is the storage capacity as the Asus Eee PC 2G Surf has only about the 2GB storage which is really not enough. Your Operating system takes almost 1600 MB of the storage available so which means you are left with only 400 MB or so. Disgusting isnâ€™t t? Do not worry as the two USB ports helps in connecting the notebook to the external hard drives. External Hard drives are really cheap these days so getting one is not a big deal.

Now I am coming to the best part of it, connectivity. The best feature in the Asus Eee PC 2G Surf is the 2G connectivity it has. The connecting speed is just amazing and even if you are using a good network then you will get a feel like you are using 4G. Huh, that much cool.

So that is it, now it is in your hand to hit a store to buy it.

If reports are to be believed that Asus may come up with an extremely cheap netbook. The company is planning to launch an Eee PC netbook priced less than $ 200. The most surprising part of the netbook is its price. Most of the netbooks which hosts Windows 7 as OS are priced between $…