When Samsung launched S8500 Wave, the same created huge wave in the smartphone market and now with the launch of Samsung S8530 Wave II, the South Korean brand plans to take this wave to the very next level. Loaded with high-end features, Samsung S8530 Wave II is might very well give its counterparts a run for their money. 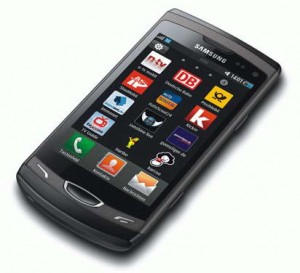 There are not many differences between Samsung S8530 Wave II and its predecessor S8500 Wave. The phone is in all metal, and looks remarkably sturdy measuring 123.9 x 59.8 x 11.8 mm and weighing 135 grams. Â At a first glance, the design of the phone makes it look like HTC Desire. However, the major difference between S8530 Wave II and its predecessor is the screen. Unlike Super AMOLED screen found in S8500 Wave, S8530 Wave II features a larger 3.7″ super clear LCD screen. The LCD screen improves brightness and is resistant to reflection.

The Samsung S8530 Wave IIâ€™s super clear LCD screen can display 16 million colors of resolution measuring 480 x 800 pixels. The display has an anti-scratch Oleophobic surface and is equipped with an accelerometer sensor for UI auto-rotate. There is a proximity sensor for auto-turn off and other added capabilties of the screen are handwriting recognition and TouchWiz UI 3.0. The phone features Nuance’s T9 Trace text input system, whereby users can trace a particular word on the keyboard and enter it.

The phone is powered by ARM Cortex A8 1GHz processor, and runs on Bada 1.2 OS platform. One can store a large number of phone book records as the phone comes with an internal memory storage of 2GB which can be increased to a whopping 32 GB, with the help of a microSD card.

The phone ensures smooth connectivity supporting both 2G and 3G network. Connectivity of the following classes are supported by the phone:

It also comes with BlueTooth 3.0 with A2DP profile and a micro 2.0 USB port. One can browse the WAP 2.0/xHTML, HTML web browsers.

Though the phone is not much different from S8500 Wave, still its super LCD screen along with other outstand features makes it one of the great smartphones available in the market. Though users may not find great updates in Wave II, still the powerful CPU, HD video recording, premium connectivity and multimedia features are some of the major USPs of the phone.

All in all, the phone very much appealing to users who want to enjoy simple applications in a great way. Meanwhile, with Samsungâ€™s claim that the phone will support more than 1000 applications available in their application store, the phone is expected to find great favors among buyers.

I really love to own a BlackBerry. There are many features in BlackBerry which are not available in other mobiles. I was very happy when I heard that BlackBerry is releasing some flip model mobile phones. Research in motion RIM has announced the first ever one of its kind flip version of Blackberry its called…

Full Review of Nokia C6 The slider QWERTY keyboard set up and the silver surface casting feels the Nokia C6 similar to Nokia N97. The C6 handset is commanded by the processor of ARM 11 4334MHz with the Ram of 128 MB. The 3.2â€ TFT touch screen of C6 helps to make comfort reading in…

Optimus 7 The new LG E900 Optimus 7, along with the LG Optimus 7Q C900, has been released only recently. The Optimus models of LG have earned tremendous response for their amazing looks and features. The LG E900 Optimus 7 keeps up the name of its makers. This sleek cell phone has it all to…

Motorola, the trendy mobile gadget company will be launching its new touchscreen phone the Moto SURF A3100 and it is a touch-based surrogate for the Moto Ming. The A3100 is powered by the Windows Mobile Professional 6.1 Operating System and comes with 2.8-inch display screen. This mobile features all the ultra-modern mobile features with Bluetooth…