Dual SIM phones are becoming increasingly popular nowadays because of the fact that they are simpler to use than perceived and are a better alternative than carrying two phones. The latest offering in the Dual SIM segment is the Samsung C5212 DUOS which supports two GSM connections. The looks of the phone are pretty ordinary but it makes up for it with some great features. 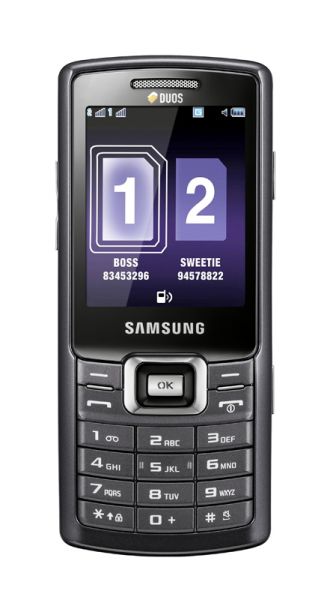 The front panel sports a 2.2 inch TFT screen display followed by the keypad. A rectangular silver embossed colored strip forms the D pad, on the left of which are the soft keys for the menu and the calling keys. The soft keys for contacts and the call end are on the right side of theÂ  pad. The left panel has the volume rocker and the all in one slot for the charger, earphones and the USB cable. On the right panel is the SIM switching key and camera key. The back panel is quite smooth and glossy and sports a 1.3 megapixel camera. The micro SD card is placed below the battery in Samsung C5212 DUOS.

The C5212 supports two GSM connections in which both the SIMs can be used simultaneously. However, calls and sms’es are sent using the default SIM. One other thing which limits the C5212 is that every time the master SIMs is changed the phone restarts, which is quite inconvinient and cumbersome. Both the SIMs support dual frequency. The list of contacts and messages on both the SIMs as well as in the phone are displayed simultaneously.

The Samsung c5212Â  comes packed with a 1.3 megapixel camera. The pictures taken with this camera are of a good quality especially the ones which are clicked outdoors. Even though the phone lacks a flash, the pictures taken in low light gives descent results. The maximum resolution can be set at 1280×1024 pixels. Some of the options for camera include selecting the shoot mode, adjusting white balance and exposure settings. One can also add effects like black and white, sepia, negative, etc. Photos can be edited with the photo editor software which comes inbuilt with the phone.

The phone supports video recording, though the quality of the videos are not of standard quality and actually not upto the mark. The maximum resolution for a video can be set at 176×144. There are options to adjust the white balance and brightness and also add effects as stated above.

Ehh. not quite! The Samsung c5212 DUOS comes with a music player and a FM radio. The audio quality is quite good but sometimes on higher volume its not that clear as its supposed to be from a Samsung stable when on loudspeaker mode. On the headphones its a lot better. The audio levels while listening to music on the headphones are high. The music player supports MP3, AAC and AAC+ file formats. The FM radio is simple to operate and gives a good reception. The device supports FM recording, though the quality of recording is not up to the mark.

The samsung C5212 lags behind as far as applications and games are concerned. Although the phone comes preloaded with with games like Cannonball and Free Kick. Connectivity options include Bluetooth and GPRS along with USB. The phone has an internal memory of 56 MB which might seem to be a lot less these days. But ofcourse the memory can be expanded to 8GB with the microSD card. The device gives a good batter backup. During testing, a single charge lasted around 3 days with a couple of hours of talktime and around 3 hours listnening to music.

The Samsung C5212 costs around Rs. 6800 ($140 approx). At this range you can consider the Spice D90 and Fly DS500. Both the above mentioned phones support Dual Sims and comes with a shade better 2.0 megapixel camera.

The Treo Pro smartphone by Palm is perfectly balanced, with email, Wi-Fi, and GPS and large color touchscreen.

Nokia has been trying hard to compete with brands like HTC, Samsung, Motorola etc in the smartphone segment by coming up with value rich handsets. Nokia C3-01 Touch and Type is another offering from the Finnish mobile phone manufacturer aimed for users longing for easy access to messaging and social networking sites. However, the phone…

Samsung Captivate When the Captivate was announced earlier this year, expectations became high. But no one expected the phone to become this big as it has now. The U.S carrier AT&T has got a power-packed smartphone that can finally give sleepless nights to the Google Android phone creators. It is even said to have the…