Nokia has been trying hard to compete with brands like HTC, Samsung, Motorola etc in the smartphone segment by coming up with 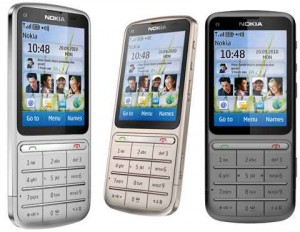 value rich handsets. Nokia C3-01 Touch and Type is another offering from the Finnish mobile phone manufacturer aimed for users longing for easy access to messaging and social networking sites. However, the phone is not in the league of other high end sets manufactured by Nokia such as N9, E7 etc.

At a first glance, Nokia C3-01 Touch and Type looks pretty much similar to Nokia 6700 Classic. The phone boasts of a standard alpha numeric keypad and has a brushed metal finish. The phone is slim and has a solid feel. C3-01 is slim measuring 111 x 47.5 x 11 mm and is extremely light on your pocket weighing just 100 grams. You can find the camera and volume adjustment buttons on the side of the phone. The rounded edges of the phone make it comfortable to grip and on the top of the headset you will find a micro-USB connector, headset connector and a plug for charging the device.

The 2.4 inches TFT touch-screen is not very large as compared to other touch screen cell phone available in the market. The screen is capable of displaying 256K colors of resolution measuring 240×320 pixels. The user interface of the phone has been reorganized and the onscreen buttons are big. The disappointing part is that since the touch-screen is more of a resistive type, you have to exert some sort of force to use it. We felt that the touch-screen could have been made better.

The internal memory of Nokia C3-01 measures 30 MB, 64 MB RAM and 128 MB ROM, but then it has an external memory slot via which the memory can be expanded to a whopping 32 GB. Nokia C3-01 is available in various colors (Silver, Warm Grey and Golden Khaki). Some of the other technical specs of the phone are

Networking and Connectivity plays a major factor for the sale of any smartphone. If a smartphone has poor connectivity and 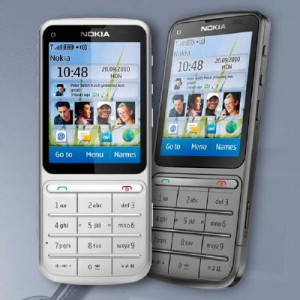 The phone boasts of a stereo FM radio with RDS along with support for various video and music formats. The music player of the phone is capable of playing MP3, WMA, WAV, eAAC+ music file formats while the video player supports MP4, H.263, H.264 and WMV video formats.

Camera has now become an integral part of high-end phones which allows you to instantly click the moments you want to capture. Nokia C3-01 is equipped with a 5 mp camera which lets you click photographs of resolution measuring 2592×1944 pixels. The camera is equipped with LED flash which lets you click sharp images even in dim light. The video recording is slightly sluggish though. You can record videos at VGS@ 15fps. Secondary camera for video calling is absent.

Nokia C3-01 Touch and Type is a budgetary smartphone aimed at masses. If you want touch screen experience at a cost effective price point, then you can definitely bank upon this phone. The phone has nothing extraordinary to boast about itself and at the same time does not have any major drawbacks, considering its price range. With C3-01 Touch and Type, Nokia has once again proved its mettle in rolling out quality phones for masses.

Samsung Delve will be hitting the market in November. But recently some of it’s images are leaked. I guess the device is still in the Beta phase so even Samsung is not speaking about it. The mobile looks like a mixture of Samsung Instinct and Samsung F480. The mobile features a 3.0″ display and supports…

CES 2009 was almost certainly eclipsed with the Palm pre with WebOS, but it wasnâ€™t the only smartphone at the event, but also many small known mobile phones were hanging around at a booth of Microsoft, it is non-other-than, the Mobinnova ICE. Do to you remember Mobinnova? This model emerged when Sony Ericsson switched from…