Powered by Android 2.1 coupled with HTC Sense and a great capacitive touch screen, makes HTC Wildfire a powerful smartphone. Loaded with rich features, the phone looks like a mini Desire. However, its multi-touch support along with its competitive pricing makes it one of the best buys.

Much like the phone itself, the design of the phone is compact too. Wildfire measures 106x60x12 mm, and is light on your pocket weighing just 118 grams. The phone feels solid in hand, with two soft-touch plastic in bronze and brown wrapped around its display. Just like Desire, the track pad control in beneath the screen. Even if you compare it to other Android phones having 3.2″ display screens, the compactness of Wildfire is still maintained to a great extent.

The 3.2″ capacitive touch screen of the phone can display 16 million colors with resolution measuring 240 x 320 QVGA. The phone comes with seven customizable home screens and for viewing them over quickly, it is equipped with pinch-to-zoom feature.

Every attempt has been made to keep the number of physical keypads to the minimum which is evident from the phone’s single volume control button. The screen lock button is placed at the top of the phone. Beneath the display one can find four touch sensitive keys namely Home, Menu, Back and Search along with an optical joystick.

Just like other smartphones fabricated by HTC, specs of Wildfire are envious. The phone uses the Android 2.1 platform and uses Qualcomm MSM 7225 528 MHz processor. The internal memory storage of the phone measures 512 MB ROM and 384 MB RAM which can be expanded with the help of a microSD memory card to a staggering 32GB.

Wildfire boasts of rich multimedia connectivity features and comes a nice image gallery which allows you to browse images as per your liking. You can either browse images as thumbnails or filmstrip or as a slideshow. The phone is also equipped with a music player and an FM radio. The phone supports MP3,AAC, AMR, OGG, M4A, MID, WAV and WMA music formats. On the other hand 3gp, 3g2, MP4, WMV video formats are equally well supported. 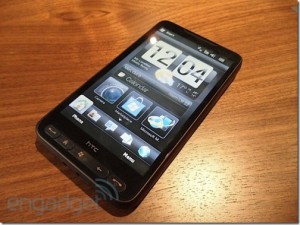 Connectivity is seamless with Wildfire as the phone is equipped with loads of connectivity options. It offers EDGE, GPRS, Wi-Fi 802.11 b/g and 3G HSDPA connectivity and is also equipped with BlueTooth 2.1 with A2DP profile. There is support for other profiles as well such as PBAP, SPP, AVRCP, GAP, GOEP, HFP, HSP etc. The GPS reception is reasonably good and the phone has standard Android WebKit based browser. The phone comes with a 3.5 mm stereo audio jack and a 5 pin micro USB 2.0 port. Android 2.1 along with Wi-Fi 802.11 b/g offers users a smooth browsing experience.

Wildfire is equipped with a 5 mega-pixel camera with a maximum image capturing resolution of 2592 x 1944 pixels. The camera is equipped with autofocus and LED flash and the camera interface provides high-tech customized options such as White Balance, ISO among others. However, the video recording is not great as it can record CIF videos only at 15 FPS.

The phone comes with a rechargeable 1300 mAh Lithion-ion battery offering a talk time ofÂ  8 hours (approx) and a standby time of around 28 hours.

Manual guide is extremely important which helps users use their phone in a better way. To download the manual click here

All in all it can be said that if you are looking for a budget Android phone then HTC Wildfire will certainly cater to your need. The special features such as HTC caller ID showing the callers Facebook status and birthday reminder along with in-built dimmable flashlight are some of the hallmarks of the phone. Though Wildfire may lack the charisma of its larger cousin HTC Desire, but still it has features which can really make buyers go wild for it.

Samsung is on the verge of launching another touch-screen smart phone based on the Android platform. Other variants released earlier on the same platform were the Galaxy & the Galaxy Spica. â€œSamsung I5800 Galaxy 3 (a smart, social media power house) is totally different from those handsets and comes with a very improved software personalization,…

To capture the maximum share in the mobile market Sony Ericsson is launching many new mobiles in different categories. The soon-to-be-launched Cybershot branded phone from Sony Ericsson is initially code named as “Kate” and very soon it changed to “Filipa”. Recently there are some leaked pictures floating on the Internet related to Sony Ericsson C510…