Announced along with its larger cousin HTC Design HD earlier this year in September, finally HTC Desire Z has hit the markets. To its credit HTC Desire Z happens to be the first Android 2.2 HTC handset which features a slide out keyboard and going by the list of features, it seems that HTC Desire Z can very well become the desire of phone buyers.

Just like several other phones rolled out by HTC, HTC Desire Z boasts of a robust and attractive design. The battery cover and the screen part comprise of brushed aluminum and the rest of the phone is made up of grey plastic which facilitates the antenna to catch the signals. Aluminum casing gives Desire Z a solid sturdy feel. The dimensions of the phone measures 119×60.4×14.16 mm and the phone is quite bulky as it weighs 180 grams. 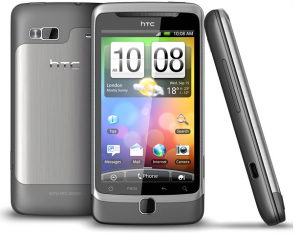 The 3.7 inches S LCD capacitive touch screen of Desire Z can display 16 million colors. The display size measures 480×800 along with improved contrast and viewing angles and as compared to previous LCD screens, is much more visible in sunlight. The phone has a QWERTY keypad along with an accelerometer sensor for UI auto rotate and a touch sensitive control panel. The display also has a proximity censor for auto turn off and a multi touch input method. The display also has touch sensitive control panel along with optical track pad.

High end specifications which have been hallmark of several other smart phones manufactured by HTC can be found in Desire Z too. The internal phone storage memory measures 1.5 GB, 512 MB RAM and the phone can support micro SD up to 32 GB. One can store a large number of phone contacts and photo calls and with an 800 MHz Qualcomm 7230 processor, operations are smooth.

HTC Desire Z provides robust connectivity thanks to Bluetooth 2.1 with A2DP profile along with Wi-Fi and a 5 pin micro USB 2.0. Other Bluetooth profiles supported by the phone are AVRCP, GAP, GOEP, HFP, HSP, PBAP, SPP among others. There is also support for GPRS (Class 32), EDGE (Class 32) and 3G (HSDPA and HSUPA). However there is no infrared port available in the phone.

Desire Z comes with Android 2.2 operating system which along with HTML and Wi-Fi 802.11 b/g/n gives one a smooth browsing experience.

HTC Desire Z comes with a 5 mega-pixel camera equipped with autofocus and LED flash. The photos clicked are fine with bright colors and sharp details. Geo-tagging, face detection capability, built-in-effects among others are some of the other standout features of the camera.

To capture the maximum share in the mobile market Sony Ericsson is launching many new mobiles in different categories. The soon-to-be-launched Cybershot branded phone from Sony Ericsson is initially code named as “Kate” and very soon it changed to “Filipa”. Recently there are some leaked pictures floating on the Internet related to Sony Ericsson C510…

I really love to own a BlackBerry. There are many features in BlackBerry which are not available in other mobiles. I was very happy when I heard that BlackBerry is releasing some flip model mobile phones. Research in motion RIM has announced the first ever one of its kind flip version of Blackberry its called…

Motorola, the trendy mobile gadget company will be launching its new touchscreen phone the Moto SURF A3100 and it is a touch-based surrogate for the Moto Ming. The A3100 is powered by the Windows Mobile Professional 6.1 Operating System and comes with 2.8-inch display screen. This mobile features all the ultra-modern mobile features with Bluetooth…

Nokia has recently launched four new high end models. The two new Model, N79 and N85 were earlier announced but the 8800 Carbon Arte was lately announced and now we have got the official news about the N96. Nokia N96 is a slider cellphone with 16 GB of built-in memory. It is a quad-band, US…