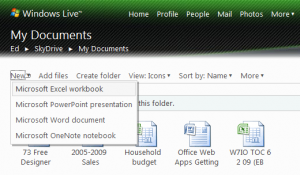 Microsoft has given us a sneak peek of the upcoming Office Web Apps. Using the cloud-based SkyDrive storage as a backbone, Microsoft Office Web Apps enables to access and work with Word, Excel, PowerPoint, and OneNote files using any Online Web browser from any part of the world.

The Web Apps provide a platform for creating and editing basic office files via the Web. Microsoft has worked greatly towards ensuring that Office Web Apps render documents accurately in browsers without data loss or formatting issues. Compared to the desktop versions, the Office Web Apps are most definitely streamlined as they are meant to be.

Office Web Apps come in any three different configurations, only one of which is available for testing now. The three version cater to different categories, namely, the general public, business customers and corporates.

As promised by Microsoft in its press release, Office Web Apps enables one to view the documents seamlessly in the browser with great fidelity. With a few exceptions, every Word, Excel and Powerpoint file look exactly the same in the browser window as in the desktop program.

Charts and PivotTables in Excel look indistinguishable from the versions saved on the desktop. All the controls in data tables and PivotTables to filter, sort, and rearrange data are very much usable in the browser.

Web Apps are designed to create and edit, just the basic files. But anything more than basic becomes sluggish. The editing interface is familiar and is similar to the desktop version of the Office. 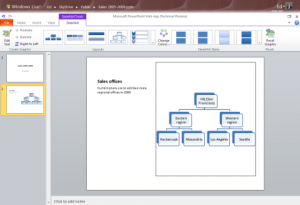 In PowerPoint you can create new slides with ease and even add SmartArt to create informational graphics and org charts. But the formatting of those SmartArt objects PowerPoint Web App is a big hassle. A very notable omission is the complete absence of transition tools for creating that trendy effect between slides or animating objects on a slide.

The Excel Web App is good for entering text and numbers, but creating a chart is impossible. You cannot format the charts in a worksheet, although you can change the underlying data. Similarly, you canâ€™t create or edit a PivotTable on the web.

The biggest question everyone seems to ask is whether it will displace the Desktop version of the Office Suite and take its place. Based on the preview we have, there is no indication of that happening. The web-based programs are ideal for just sharing and basic editing, as their feature sets are too restricted to be competitive with the desktop versions.

Everyone, grown up or kids, loves gadgets. Why not? They do many useful things in a handy way. Let me introduce to you some of the best toy gadgets today. Here is a list and description of top 5 toy gadgets. Check them. 1. Mecannoâ€™s Spykee Spy Robot The name itself says what can be…

At one of the shows conducted by Sony for Home theatres showcased all new desktops in three variants along with range of projectors, A/V receivers and LCD TVs and Blue ray players. The three models of desktops are packed with Blue ray drives and with higher end version offering BD drives that are rewritable drives too. The JS series of VAIO is an entry level product with a display of 20.1 inch wide; Blue Ray players are optional and come only in three colors priced from $1000. While the VAIO LV series has 24 inch screen of better kind with rewritable BD drives that are optional too and one terabyte storage capacity.

Slax is a Linux operating system that is basically a Slackware based and you can have it running on a LiveCD or boot it from a USB or directly from the RAM. One good thing about it is that it comes packed with a full range of applications pre-installed with it. Of course small in size and you can customize it as you like. This USB bootable Linux enables to have desktop based environment for you no matter wherever you go. Any system that allows you to boot from USB can have it running Slax for you. So you can run Slax right from your CD/DVD, USB Drive, MP3 Player or even from a Camera.

Convert Pdf to Word Last night i was looking for some piece of software that would let me convert some of my pdf documents and forms into microsoft word so that i can easily edit them. I searched a lot for around 20 odd minutes and found some nice softwares, but they were all paid…

5 and 8 megapixel shooters have been around for a while now, giving small cameras a run for their money.