I have to confess that i have become a big fan of Google Chrome browser offlate. The reasons perhaps could be faster browsing, hassle free surfing, and ofcourse release of some plugins and extensions. Also i guess, it could be for a change that i have converted to Google Chrome. As you guys might be knowing google has announced the Google Chrome OS as well earlier this week which created a stir in the internet world.

After our earlier post on Some Google Chrome Extensions and Plugins, i was getting a lot of emails from our readers to post a similar post for Google Chrome Themes and Skins. So i decided to list some of the best themes i found so far for google chrome.

True Live Theme : Nice simple theme available in 8 different colors – blue, back, red, green, orange, yellow, white and pink. The theme has been created by Stamga, the moderator at ChromePlugins.org . The theme works with all versions of Google Chrome from stable, beta and Developer versions. If you need a simple look without much additions this theme is for you. 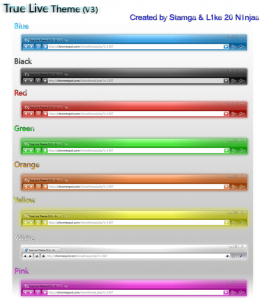 Aero Theme: This is another theme which has been created by Stamga. This is my favourite theme which i am currently using. This is a much more complete theme as compared to True Live. The icons and tabs have been perfectly skinned. It comes in 3 variations – Aero White, Aero Black and Aero Firefox Special Edition. This works for all the stable, beta and latest dev channels. 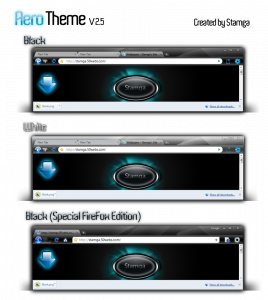 Xeno Theme: This is pretty similar to the Aero Black theme, but with completely differently skinned icons and other features. One of the best dark skin theme for chrome yet. No color variations in this. Available for stable, beta and developer builds of Google Chrome. 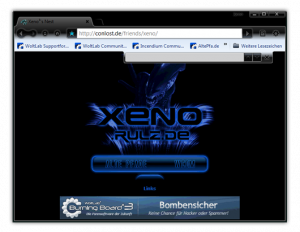 Toons Buttons Theme :A very simple yet very interesting theme for google chrome. It merely replaces the buttons of the browser with Toons like buttons. The color of the overall theme is the same as the default theme of chrome. A nice alternativei would say to the regular theme. This theme is packaged in .crx format and so it can be used by only Developer Channel users of Google Chrome and not for Stable and Beta users.

Berries Theme Pack : A pack of 6 funny and strange looking themes based on different kinda of berries such as Gooseberry, Blackberry, Raspberry, Strawberry, etc.Â  Different colors are there as well which makes it good for all kinds of people. Again this them pack is in .crx format and hence only works with the developer’s build of Google Chrome.

Clouds Theme : A very nice fitting theme based on patterns and textures resembling clouds. The color of the theme is pretty soothing. Again the theme is packed in .crx format and thus only works on the dev build of chrome. 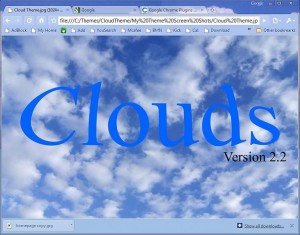 Jedi Theme : This is a very simple a bit darker and more clear theme developed b Jedi Knight, a member at ChromePlugins. Enhances the appearance of chrome nicely though that orange strip might be a bit odd. This is available for all versions of google chrome inlcuding the stable, beta and dev channels.

DST – Dark Skin Theme : As the name suggests, its a dark skinned theme for google chrome. For a change its not modeled on black colors but a shade of black grey which looks really good. The theme is available accross all channel of google chrome, stable, beta and dev builds. It includes the .crx file for the theme to work as an extension as well as the default.dll file. 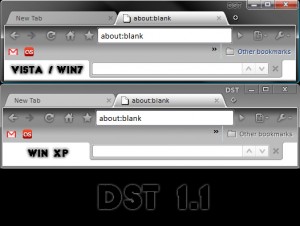 I would be posting more about google chrome later on. I am sure we are going to hear more of Google Chrome in near future. All the themes were officially released by their developers on ChromePlugins.org.

Web Elements have been introduced by Google as a new one-stop shop for services which can be embedded into any web page without any coding required. Embedding Google Calendars, Google News Feeds, YouTube videos, Presentations, spreadsheets are the features launched and many more are to be released. Global conversations is an interesting web element added…

Google is trying very hard to make our lives very easy. They are coming up with lots of new ideas which will help us to get the information very quickly. There are also some features which may not be damn useful but they may make your tasks look cool and easy. If you are interested…

The Indian business sector is set to receive a leg up with search engine giant Google launching Google Global Market Finder. This is a free online tool for advertisers which will help them to discover overseas market and has been designed in order to help Indian business enterprises to expand their business and reach out…