Google’s Android operating system for handheld is making waves, butÂ within the tech circle. Despite providing some pretty interesting features as far as the level of integration with various Google services, it lacks the level of popularity enjoyed by other similar operating systems, such as Symbian and Windows Mobile. But then, its potential is very impressive, given the fact that it can be easily deployed to run on x86 systems.

Are you one of the geeks who craves to have a feel of the Android, without actually purchasing a Android based device? If you answer Yes, you have an opportunity to do so. Proving their on-going commitment for developing Android, Google has released a Live CD with the latest Android version designed to run on any PC, regardless of the particular operating systems running on the system currently. Please make a note that Live CD is aimed at developers, who actually create apps for this operating system. It is not a full fledged Operating System and normal users won’t benefit too much from it, apart from the possibility to have a feel of the Google-based OS.

You have two different methods to get a feel of the Android interface:
1)Using a Physical Live CD
2)Using a virtual Machine Running on your computer 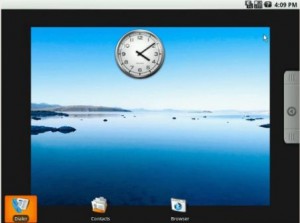 Option 1 For Beginners: Burning your Live CD. This one is for the beginners as it is very easy to do. You will have to burn the Android OS Image onto a CD and then boot through it.

Step 4 â€“ Restart your computer and have CD/DVD Drive place ahead of HDD in list of Boot Devices by making necessary changes in the BIOS.

Step 5 â€“ Simply stand by and relax while it loads. Voila! Now you have the Google Android operating system running in front of you.

Option 2 For Experts: Running the Android OS on a virtual machine on your computer. This method is a bit difficult, but a lot more rewarding as it will allow you to run your other applications at the same time as the Android and requires no restarting.

Step 3 â€“ Get a Virtual Machine Application (like Sun Virtual Box) and install it on your existing Operating System.

Step 4 â€“ Install an optical drive software emulator (like Daemon Tools) in order to get the Live CD running within the Virtual Machine. (This is not required for some Virtual Machines like Sun Virtual Box, though others might require).

Step 5 â€“ Then Mount the Live CD image into the Optical Drive Emulator.

Step 6 â€“ Using the Virtual Machine software, create a new virtual machine with at least 256MB of RAM and a couple of hundreds of MB HDD space.

Step 7 â€“ Withing the Virtual Machine software, select the virtual drive on which the Live CD image is mounted as the boot drive.

Now the virtual machine should start and you will be able to access the Android OS, in a fairly reduced version restricted to only the shell. You have a feel of the OS now starting from the first screen you’ll encounter and up to the settings and features.

If you host your Domain on a paid hosting then it is very much better to setup a mail account with them. But there are some people who like to setup their mail accounts at Google. Google provides Gmail for hosted domains. I also like to use to use the Google hosted mail account because…

Web Elements have been introduced by Google as a new one-stop shop for services which can be embedded into any web page without any coding required. Embedding Google Calendars, Google News Feeds, YouTube videos, Presentations, spreadsheets are the features launched and many more are to be released. Global conversations is an interesting web element added…

Surfing the web looking for a good scrabble solver online? Go through this article to know about the best online scrabble solvers and softwares that will help you crack your Scrabble board games very easily. Scrabble Solving Solving scrabble games needs a lot of patience and knowledge. It is a hobby for millions of people…

Ever since Google Chrome started supporting extensions (although limited and only in developers channel), quite a few extensions have cropped up. One of the websites dedicated to Google Chrome Extensions, ChromePlugins.org, have posted some interesting extensions that can be used. I am listing some of the useful plugins/extensions over here : GooglePedia Extension : Displays…

Excel is a very handy tool. It is used for multi task. Know tips to make Excel more useful. Know few today and keep checking this section for further tips and tricks in Excel. Changing The Font Size By Using Shortcut Keys There are interesting shortcut keys that allows in changing the point size of…