Search engine giant Google has blamed the Chinese government for interfering with one of its most popular services – Gmail. It is 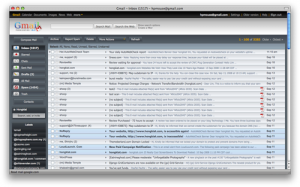 to be noted that Chinese Gmail users have complained that they are facing problems with the services which includes difficulty in sending mails and marking them as unread apart from other issues.

No Technical Issues On Googleâ€™s Part

The Mountain View, California based company has said that it has found no technical issues on its parts and according to The Guardian, the application set up by Google which helps people to locate their missing friends and relatives in the recent earthquake followed by tsunami in Japan have also been compromised with.

Notably, a blog posted by Google on March 11 said that it has noticed some politically motivated attacks on its users in the country. The posting also mentioned that the attacks were exploiting vulnerability in Internet Explorer and Google and Microsoft are working to address the problem.

Google and China have been at loggerheads ever since the former disclosed theft of intellectual property way back in January 2010. Chinese operations of Google commenced in 2005 but when the announcements of the company that it has been hacked, Google moved its operations to Hong Kong.

Recently I got a mail saying “Gmail Account Suspended Notice“. I was really shocked to see the mail as I have got very important data in my account and more over I wouldn’t be able to change my email at all other services. My life would really become very miserable if my Gmail account is…

These days I’m almost seeing a new feature added to Gmail everyday. Today Google added a new feature to Gmail which will enable you to add your location in the Gmail signature. A location string is attached to your current signature after you enable this feature. This feature will be very useful for people who…

The Indian business sector is set to receive a leg up with search engine giant Google launching Google Global Market Finder. This is a free online tool for advertisers which will help them to discover overseas market and has been designed in order to help Indian business enterprises to expand their business and reach out…

Ever since Google Chrome started supporting extensions (although limited and only in developers channel), quite a few extensions have cropped up. One of the websites dedicated to Google Chrome Extensions, ChromePlugins.org, have posted some interesting extensions that can be used. I am listing some of the useful plugins/extensions over here : GooglePedia Extension : Displays…