Right after the release of Facebook 1.1 version for iPhone they were sure that the next version is going to be much better one in all aspects. This version of Facebook 2.0 was in the making during the month of September. They had probably fulfilled their promise and kept it very close to the expectations of its users. Recently, the new version of Facebook was out now and it had a very intuitive, simple and tidy interface. It does have that nativity at the same time some pretty good functionality too. 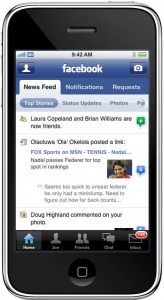 For instance the older version of the Facebook had NewsFeed feature supported in which any kind of photo uploads and updates in the status alone were displayed. In case of the new version this newsfeed feature had been through refinements and now it displays all kinds of updates in the profiles, photo uploads and new posts. You can set the feed limited to your interests and needs. You can even make comments on the news so it is highly customizable when it comes to user preferences unlike the annoying previous version.

This major release hit the App store and is already the talk of the town for the iPhone users. I bet it is worth than the time you spend for the upgrade and you can get it from the iTunes link. Though it has few limitations when it comes to support of facebook based applications by the browser it much better to have it, since this iPhone application is far better than having the annoying applications when we browse through the site.

Almost a year after being launched worldwide, iPhone4 has finally been launched in India. Telecom carriers Aircel and Airtel have launched the phone. While the 16GB model can be snapped for Rs 34,500, the 32GB can be purchased for Rs 40,900. Aircel is offering 100% value back to its iPhone users via two plans namely…

The launch of two new special designs for the iPhone 3G was announced by Sena Cases. Leather artisans in Europe have handcrafted the cases, and they are developed from the finest quality, full-grain, soft Italian Napa leather. So if you love your Apple iPhone then you must use these these cases to protect it. I…

iPhone 4 users in India looking forward for making video calls over 3G will be disappointed to know that they won’t be able to do it as the application which enables doing so have been locked by Apple. Video calls can be made via Wi-Fi but not through 3G. An Indian Apple spokesperson said that…

One of the features which is missing in the iPhone is that it lacks integrated support for MMS. If you are used to using MMS then it can be painful for you. The iPhoneâ€™s built-in support for email can be used to work around this lack of functionality to send and receive picture messages and…

QuickGold is a Free iPhone or iPod touch application. It intends to replace the “Quicksilver for the iPhone”, therefore the name is QuickGold. It is a keyboard-based app launcher which can be called on by pressing the home button when you are at the homescreen. Once activated you can then start typing and view its…