The new update for Apple iPhone is ready to download and install as it is readily available for all its users. Whatâ€™s in it? Since Apple has made few promises which it was so sure to be fulfilled in this update. It assures a much improved battery life, dropped calls will be relatively few and reduced rate of crashes of the applications based on it. It has been reviewed and brought to the notice of the Company about the 3G Connectivity related issues which are supposed to be resolved by this release. Steve Jobs committed during the iTunes and iPod even all these things and even spoke about the update saying that its ready for use for all iPhone owners of the world for free. 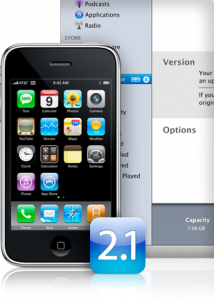 Infact, Apple had made the announcement visible on its website in regard to the free update of iPhone. Despite it beign a bulky update to be downloaded since it is sized 237.8 MB which a bit big to download immediately and experience the difference. Unlike all other updates which usually mention the new things about it in this case Apple made no remarks about what special about and what will it do to the problems. However it has mentioned it one of the webpages specifically to the iPhone Update explaining what the users can anticipate from it. I found the update to have lot of new things and changes that can make the iPhone users happier. Drastic reduction number of calls that are dropped and less number of call setup features.

For majority of its users it ensures improved life of the battery. Great difference in time is noted for the back up the iTunes. Since it takes the emails through the Post office protocol as a result makes it more reliable. All the third party applications can be more easily installed. Many of the problems have been fixed when it comes to crashes because of external applications from third party. Better text messaging, searching and loading the contacts is faster than before. Now it is much more accurate about the display of signal strength of 3G. Genius feature to handle playlists and incoming messages can be alerted by upto two alerts and it just deletes the data if you make around 10 failure attempts for password. The release on the whole handles the significant issues.

Steps to Install the New Update:

Now you can easily copy files from your MAC to Apple iPhone or iPod Touch with FileMagnet. All you have to do is just open the FileMagnet uploader on your computer and transfer your favorite PDF’s, Images, Movies, Music Tracks, Office Docs etc. FileMagnet transfers the files via Wi-Fi. So with FileMagnet you can copy…

Top Accessories to Enrich your Apple iPhone Experience What ever may be the latest sensation in the market, it fails to snap the lime light from any of the three Apple iPhones. Undoubtedly, the iPhone has been the most successful and most talked about product we have seen till date, and the hype around it…

As iPhone has become very famous, Google had released its Google Earth for the iPhone. With the help of Google Earth geographical software you can fly around the world in 3D. With this application you can easily find your favorite spots, restaurants, movies etc. You can download the Google Earth for your iPhone from the…

Earthscape is planning to relate Google Earth like Application..

Last week when I updated my Apple iPhone 3G with the new firmware updated version 2.0.2 released recently. As usual the iPhone worked perfectly normal after this upgrade, but surprisingly today morning when I tried to check my mails on the phone it started giving following error “Could not activate cellular data network” which I…